Inspiring story.... with my exciting ending!!!

I am going to start at the beginning. In 1991 Andrew was crossing the road (on foot) when he was hit by a car that was rushing to turn through a yellow light (that had turned red).

He was in bed for a year and really took to eating. Andrew made it back to work after 2 years. All this eating really packed on the pounds. He continued eating a lot even though he went back to work.

At his heaviest, Andrew weighed 325 lbs.

He joined Weight Watchers and lost 100 pounds over the course of a year. During this year he met Darcy. Darcy was an Ironman competitor. Darcy's love for the sport really inspired Andrew. He decided that he too was going to be an Ironman. Andrew met Les, a friend of Darcy's. Darcy and Les were training for Ironman USA. They took Andrew under his wings and guided him through all of the aspects of training. With the training and Weight Watchers, Andrew ended up losing over 150 pounds. With the help of his friends he achieved the confidence in his ability to complete such an event.

Andrew completed his first Ironman in 2004. He then went on to complete his 2nd Ironman in 2005. After which time, he thought he would take a "small break". That break has lasted 4 years. He reverted back to some of his old eating habits and put some weight on again. He's been stuck in a rut for the past while.... wanting to get fit but not finding the inspiration to start.

This past weekend Andrew, Darcy and Les have decided to do an Ironman together. They all signed up and got entry into Ironman Wisconsin 2010! Andrew now has the desire and the inspiration to change his lifestlye once again. Many thanks to Darcy and Les. He couldn't have made this step without your love and encouragement.

So next year I will be a blubbering mess as I see the "3 amigos" at the race start. It will be like it was 5 years ago. I can't imagine what it's going to be like when you cross the finish. Andrew I am so proud of you for making this decision. I will be here for you every step of the way.

Maybe one day I will compete in an Ironman with you???? 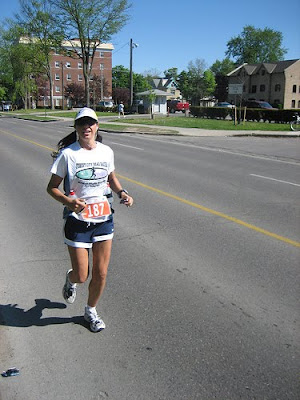 Photo of me during my first marathon.

That is so awsome, I was signed up for IM CDA this past year but had a scheduling conflict, which got me into ultra running; but I would love to do an IM as well but I'm not such the good swimmer.

This is great news and wish him good luck. I hope you make that journey as well one day!

Great News!!! You can do it!! Another picture for the laundry room.
Janet

Andrew has such an amazing story, can't wait for the next chapter. Besides we'll have such fun watching them race. Hopefully it won't rain this time! : )

This time Juli, you and I both will be in the VIP tent!

We can have lots of cocktails and try to find our way around the city with their bikes! lol

This post was absolutely motivational at best! I wish Andrew a great journey as he trains for this event. I will definitely share this story with my friend who is on the ultrarunning comeback trail and may also scratch the surface and tackle an Iron Nut (unofficial Ironman)...

I hope that it will give your friend some encouragement. I can only imagine how hard it is to make a "come-back". It's just nice to know that it is possible.