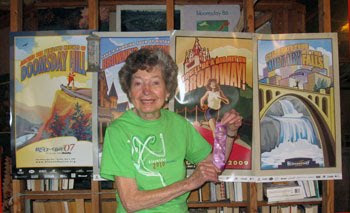 May 2006: Ginny Warden, the oldest of 124 perennials who have participated in all 30 Bloomsdays, had announced Bloomsday 2006 would be her last. But after walking the course in less than 2 ½ hours, the 86-year-old South Hill resident has taken a never-say-never approach to 2007. Quoted from the Spokesman-Review


She is still running! Check out the rest of the story and many more inspirational articles at The Fitness Diaries.

today's quote is a good one.... The brain is a wonderful organ. It starts working the moment you get up in the morning and does not stop until you get into the office.
Robert Frost

Wow, that is amazing, thanks for sharing

Let's hope that we're still active at that age!!!

Thank you for featuring my story about Ginny Warden! She truly is inspiring - full of life and energy.

gee what a great story! i can't even get my lazy butt to run this was very motivational!

Awesome! and I love the quote of the day.