Let's just start off by saying that the Nike Women's Marathon Expo sucked huge ass!!! There was a hand massage station and a smoothie station where you could spin on a bike and blend your drink..... I really don't remember what else there was. I have been to tents set up for a 10km race that beat the hell out of this one!!! WTF????!!!! They just wanted you to go across the street and purchase their merchandise at the ginormous Nike store (which we did). 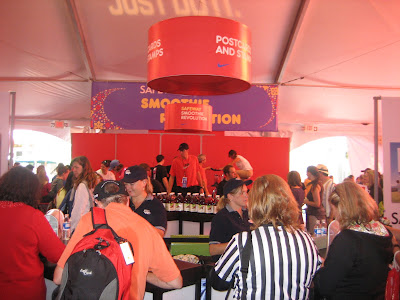 The Nike store had an outside wall that had all of the participants name on it. Jodie and I were so lucky to have been on a panel that was at eye level... some poor souls were a story up and would never been able to see their names. I will have to admit that this was really cool. What is it about seeing your name in print that makes something so much more exciting???!!!! It was nice that Jodie and I were next to each other (I kept my maiden name after marriage). 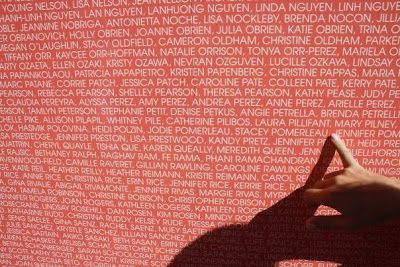 Race day started out very early!!! We were so lucky to have been staying at a hotel only 3 blocks from the start (even though it was the size of a match box.... our coffee maker was in the closet Gulp!!!).

We got to the start about 1 hour before the gun went off. 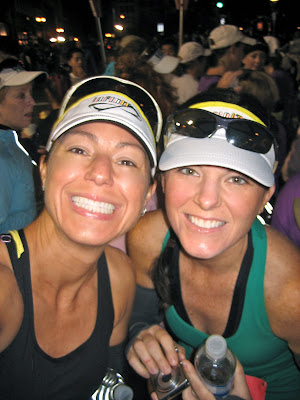 Here we are above... excited and tired. There was music blasting and we were bouncing around (mostly because it was so fricken cold with the bloody wind attacking us)!!!! 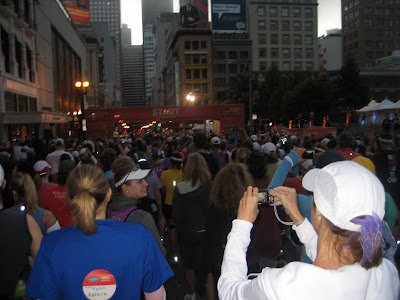 I was so cold that at mile 2 or 3, I actually grabbed a jacket that someone had disposed of on the side of the road!! I picked it up and it was a Joe Fresh brand (Canadian)... I giggled! Jodie thought I was such a loser. I am a big germ freak and it took having goose bumps on top of goose bumps to make me take the sweater. It was Pink... so I justified it! I eventually put it in a donation bin set up on the course. I really have to give the organizers a bunch of credit. The start was wonderfully organized.... we were in the 2nd last time finish carousel ('cause I had to walk most of it) and we got past the start in just over 20 minutes. I will give credit where credit is due.... great job there!!! 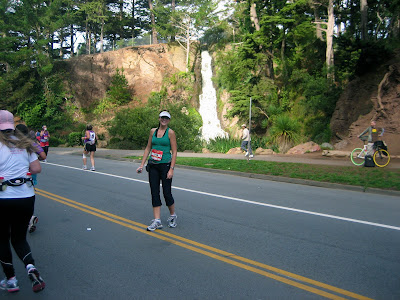 We ran through some very scenic and beautiful places. There were a couple of waterfalls and beautiful forest settings. We were very lucky that the skies were overcast and it remained cool. Perfect race day weather! 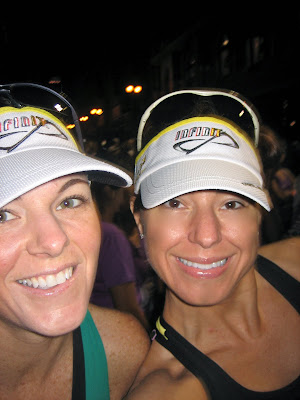 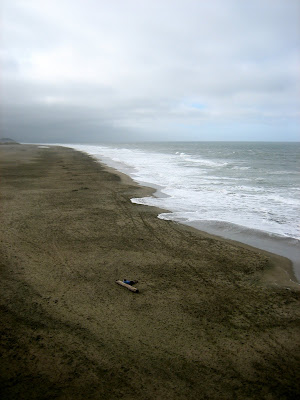 We got to run past the Pacific ocean.... how beautiful is this???? 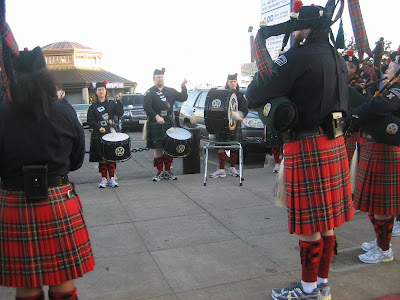 There were a few bands (not as much as I had expected).... most of the cheer leading stations had a bunch of people just standing around. I think there was one station where they were in a pyramid formation as we ran by. 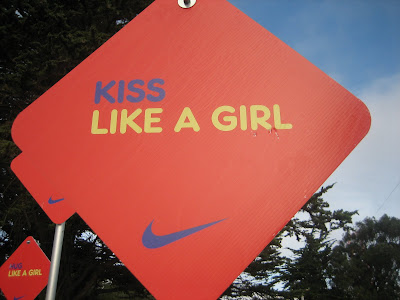 These signs were set up all throughout the course. All different sayings... I liked this one. 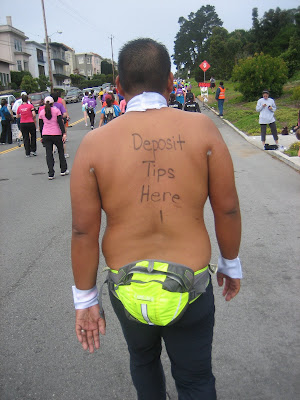 There were a few guys that ran the marathon.... this one was a real Chippendale dancer!!! 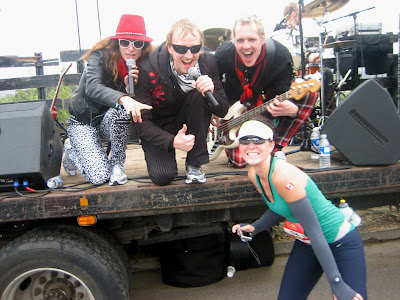 There were bands... they were all so eager to ham it up for the camera! This was the best band on the course!! Fun, fun! 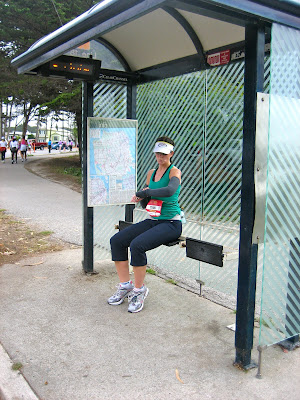 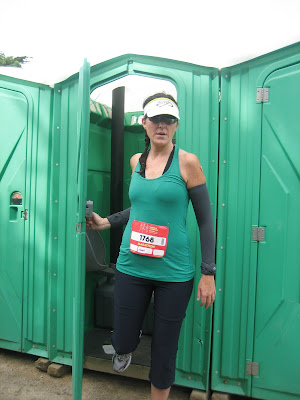 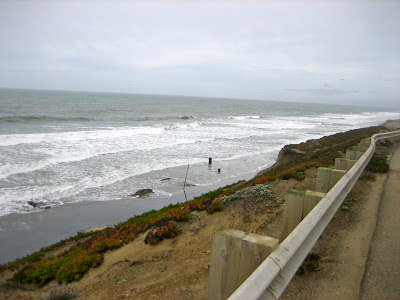 The sights were beautiful.... we passed the Golden Gate Bridge and went by the Golden Gate Park, we saw the Wharf and so many other beautiful areas. I will say that the course was great.... it could have been so friggen hilly.

They have it set up so that most of the hills (not as big as you may think) were during the first 6 miles. I thought that the homes/ apartments in San Francisco resembled the homes in Paris (not as ornate and detailed but similar).

Here we are finishing the run!! Woot Woot!! Now for the best part..... 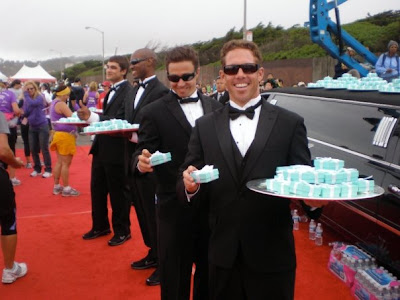 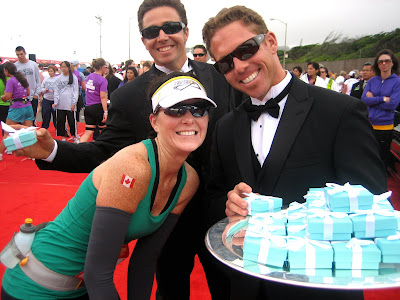 They were all to happy to pose with Jodie!!! 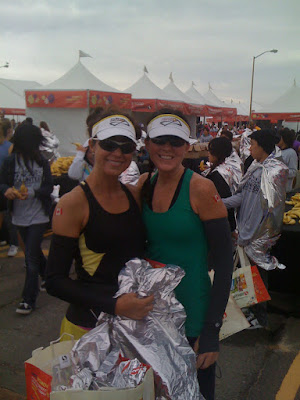 Here we are right after getting our bling!!!

Thanks for doing this with me Jodie! xoxo

After all is said and done... I think that this is a destination marathon that every woman should do once!!!! Don't go for speed... go for fun and for the bling (and the firemen)!!!!

No thank you! I had such a great time - the marathon, San Fran and most importantly - hanging out with my sister!
PS, Thanks for keeping the "not so nice pics" out of the post...haha!
Love you!
Jo

.....well atleast most of the "not so nice pics"....the portapotty pic I could have lived without! haha....

looks like a party actually..must do it one year...

Joanne and Janet applaud you guys for finishing with a smile on your face dispite your "injury" - maybe some year we will all do it together...or maybe another destination - an island perhaps....
Janet

Looks like a total blast...funny though that's the second diss I have heard about Nike's expo!

You would think that would have nailed it!