Not much to do about running..... well nothing in fact. 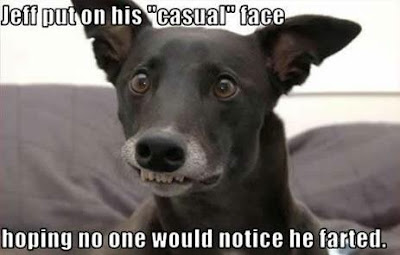 I absolutely love this.... I crack up every time I look at it. It just seems to get funnier and funnier.

Here is another classic that always has me wiping tears away.....

GHOST POOP: The kind where you feel the poop come out, but there's no poop in the toilet.

CLEAN POOP: The kind where you poop it out, see it in the toilet, but there is nothing on the toilet paper.

WET POOP: The kind where you wipe your butt 50 times and it still feels unwiped, so you have to put some toilet paper between your butt and your underwear so you won't ruin them with stains.

SECOND WAVE POOP: This happens when you're done pooping and you've pulled your pants up to your knees, and you realize that you have to poop some more.

POP-A VEIN-IN-YOUR-FOREHEAD POOP: The kind where you strain so much to get it out, you practically have a stroke.

LINCOLN LOG POOP: The kind of poop that is so huge you're afraid to flush without first breaking it into little pieces with the toilet brush.

GASSY POOP: It's so noisy, that everyone within earshot is giggling.

DRINKER'S POOP: The kind of poop you have the morning after a long night of drinking. It's most noticeable trait are the skid marks on the bottom of the toilet.

GEE-I-WISH-I-COULD-POOP POOP: The kind where you want to poop but all you do is sit on the toilet and fart a few times.

SPINAL TAP POOP: That's where it hurts so badly coming out, you'd swear it was leaving you sideways.

WET CHEEKS POOP (The Power Dump): The kind that comes out so fast, your butt cheeks get splashed with water.

THE DANGLING POOP: This poop refuses to drop in the toilet even though you are done pooping it. You just hope that a shake or two will cut it loose.

THE SURPRISE POOP: You're not even at the toilet because you are sure you are about to fart,

The Perfect Dump - Every once in a while, each of us experiences a perfect dump, it's rare, but a thing of beauty in all respects. You sit down expecting the worst, but what you get is a smooth sliding, fartless masterpiece that breaks the water with the splashless grace of an expert diver. But that's not the end of it. You use some toilet tissue only to find that it was totally unnecessary. It makes you feel that all is right with the world and you are in perfect harmony with it.

The Chili Dump - Hot when it goes in, and rocket fuel when it leaves. The chili dump stays with you all day, making your tush feel like a heat shield.

The Cable Dump - Long, curly and perfectly formed like 2 feet of E13 telephone CO-axial cable. It loops lazily around the bowl, like a friendly serpent. You wonder admiringly, "DID I DO THAT? Where did it come from?" you leave the bathroom pleased with yourself.

The Splash Back Dump - You send the dump on its way, it drops like a depth charge into the bowl creating a column of cold bowl water that washes your bottom with a startlingly unpleasant shock. Now you're wet and embarrassed.
Tip: Blot instead of wiping.

The Aborted Dump - You are in mid-dump when the phone rings. What do you do? ABORT! Pinch it off, go for the phone, and save the rest for later. It isn't pretty, but you've gotta do what you gotta do

The Childbirth Dump - This is a dump that is simply too big to go through the aperture provided by nature for the purpose. You sit there, thinking over your dilemma. First it hurts, and it isn't going to get any better. You wonder if you'll ever see your loved ones again. You imagine the newspaper headlines screaming "Man dies trying to hatch monster loaf". You realize you'll have to resolve the crisis before you can leave the bathroom. Basically there are only three things you can do:
1. Scream
2. Call an Obstetrician
3. Hope like hell have enough Vaseline to get you through it.

The Machine Gun Dump - You're just sitting there in a state of sublime peace when all of a sudden you emit a group of noisy gassy bursts that break the silence like machine gun fire. The guy in the next stall hits the floor like a combat veteran cradling his umbrella like an M16...damn commies.

Cling-On Dump - For the most part you've completed your dump, but there's one little morsel that refuses to drop off. You're getting impatient. Someone else wants to use your stall. So, you grip the seat with both hands and wriggle, twist and pump but that last little stubborn piece just hangs there, suspended, clinging like a canned peach between you and the bowl water. Maybe the person pounding impatiently on the door has scissors

The Houdini Dump - You go, then you stand up to flush, and the darn thing has disappeared. Where'd it go? Did it creep down the pipe? Did you dream the whole thing? Is it lurking out of sight? Should you wipe...maybe you should just to make sure you went. Should you flush? you'd better, because if you don't, you know it will reappear and smile at the next person who comes in

The Flu Dump - You feel so bad that you don't know which end of you to put down first. You have roaring cramps, so you sit down. Then a wave of nausea rolls over you like a cold fog, so you stand up and cramps squeeze your intestines like a vice so you sit down again...up down up down. Don't you wish Mom were close by?

The Proctologist Dump - In the beginning, the lord created the earth, the sky and the firmament, but I hope he didn't create this dump, because there is nothing biblical about it, you run out of gas. That's right, you run out of propulsion. The dump is right there at the end of your barrel and refuses to go any further. You grunt, you squeeze, you wriggle but it just stays there like a lump of lead. You've only got two choices here. One is to squeeze the damn thing back up your intestine and wait until next time. The other is to pretend you're a proctologist and go after it yourself. Not a pretty picture is it??

The Whole Roll Dump - No matter how much you wipe, it doesn't seem to be enough. You blow the whole roll and you have to flush 25 times too. The whole episode is consumer waste.

The Encore Dump - Ahhhh, you're done, so you wipe, put yourself together, wash your hands and are about to vacate the bathroom when you feel another dump coming. You have to return for a curtain call. The world's record is seven encores.

The Born Again Dump - This is a dump that's going so badly, you say "Lord, if I live through this, I'll take up religion" you always get through it, but seldom keep the promise you made in desperation, because a born again dump is like childbirth...you forget the pain quickly.
_______

Yup - that just about says it all - I think I have experienced everyone of those events - it just comes with age. I wonder what today will bring....
Janet

There always seems to be a good amount of material when it comes to talking about poop.

I didn't realize that there were so many different kinds of dumps! Great read!

All the best in your quest for your ultra!