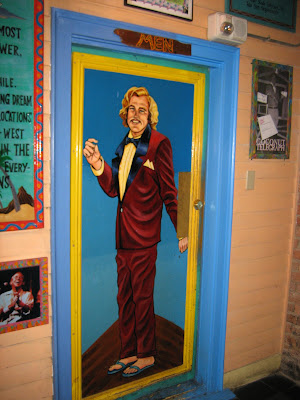 Photo above is of the Men's washroom door in Jimmy Buffett's Margaritaville (New Orleans).

I went to the doctor's today. Had blood work done in December of 2008. I only found out today that I am B12 deficient... Which answer is more likely? A) it wasn't important enough to contact me or, B) the doctor didn't look at it. I am guessing B!!!

I have to start getting monthly shots of B12 and have to start taking B Complex daily along with B12. Wouldn't one think that B12 would be in a B Complex since it's a B vitamin and all? It was not in any of the bottles that the pharmacist and I checked.

The doctor gave me a shot with 3 doses in it today to give me a jump start. I got the shot just above my butt. It didn't hurt a bit...... Until I got into my car. The injection site is quite painful. I have been whining to myself and moaning since it began to hurt. If someone was around I would be complaining about it to them.

My doctor advised me that extreme running will cause problems with my joints in the future. He advised me against it. He has no idea that what I do is nothing in comparison to most people involved in extreme sports!!! I told him that it makes me happy and I don't want regrets in life. Besides, it will be fun going to see the Doc. when I am old, using a walker and complaining about my joint problems and ailments. It's a "Rite of Passage".

Have you ever had a Bacon, Egg, and Cheese McGriddle from McDonalds? I have had about 5 over the years. One of which I ate today. Is it just me, or does it make your lower teeth and tongue feel weird?

Did I mention that my injection site hurts? OOOOOOOOOOWWWWW! This is the part where you say "You poor thing".

I have to get ready for my 18 miler in the scorching sun. If I didn't have the doctor's appointment I would be done by now. If I stopped complaining about my injection site (that still hurts) and stop blogging I could at least be started.

hey..i take b12...its the only one u hav to eat meat/eggs to get...it really helps with the energy levels..
oh..i am empathising with your injection pain...was it a really big needle or something!!???
gosh, its a bit neg of the doc to say you'll have problems in the 'future'...more probelms if we dont run i would think...

Poor Stacey - I can just see you hobbled over in your old age still running those ultras - with a walker. If it feels good just continue to do it. You only live once.
Janet

Hi Cath! I think it hurt so much because there was 3 doses. All that fluid created pressure... until it could be absorbed (I'm no doctor but that's what I think)!

Thanks for your comment Janet! Why should I have to stop doing something I love.... I could get hit and killed by a bus tomorrow. No regrets!