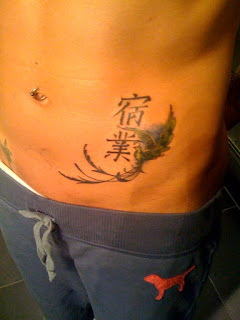 After showering we went downstairs and had breakfast. We had decided
that we were going to ride to the art museum (sans helmet as there is
no law requiring you to wear one). Had a great time exploring the
museum. What an impressive building.

After coming back to the hotel we got a car to bring us to lakefront
brewery (they hold daily tours). Your six dollar admission gets you
the tour and four free glasses of beer. I don't drink beer so Andrew
got mine as well! He got smashed! The brewery gave us coupns for two
free pints at several restaurants. We chose one closest to our
hotel. At this point Andrew is so lit up that he decided that we
should get tattoos to commemorate our trip ( I had suggested this to
him on our way here). He wanted the tattoos done immediately!!!!

I contacted the concierge at the hotel and had them hook us up. A
short period of time later we were getting some ink! We both went
larger than what we had planned.

Andrew's tattoo is fantastic!! I will post a pic once I get home (will
add some more from the trip also).

We got back to the hotel where we had dinner (11 pm is kind late for a
meal but we really hadn't eaten anything substantial since breakfast.

It's almost midnight and we're ready for bed!
Good night!

Nice tat but not too happy about riding without a helmut. Can't wait to see Andrew's. Sounds like you had a great time.
Janet

Andrew is still in shock!