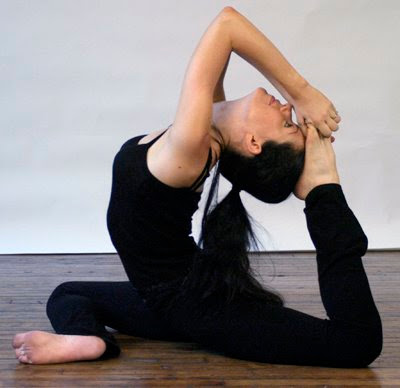 It's been about 10 days since my last post. So much has gone on. My house is now resembling it's former self..... I am able to relax more! I still have to get some yard work done to prepare for the summer. There is always something isn't there?!

The weather around here has been perfect for running. I have had some fabulous pain free runs. This coming Tuesday I have a 20 miler and I am looking forward to it.

My girlfriend has received her certification to teach yoga. She is now teaching in my area once a week. Being the greatest friend ever.... I signed up for 10 weeks of her classes ;-) . I have realized that she has been a greater friend to ask me to participate in her classes! I have completed two weeks and, I must say, it's nothing like what I have tried in the past. I leave there feeling relaxed and rejuvenated. My yoga goals: I hope to become more flexible and limber.... putting me at a lower risk of injury. I also hope to become more centered and peaceful.

I have been suffering from Post Nasal Drip. For those of you who are not familiar I will include Wikipedia's definition.

"Post-nasal drip (PND) occurs when excessive mucus is produced by the sinuses. The excess mucus accumulates in the throat or back of the nose. It can be caused by rhinitis (allergic or non-allergic), sinusitis (acute or chronic), laryngopharyngeal acid reflux (with or without heartburn), or by a disorder of swallowing (such as an esophageal motility disorder). It is frequently caused by allergies, which may be seasonal or persistent through the year, depending on the allergen(s) involved. Birth control pills or pregnancy can also cause post-nasal drip because of the elevated levels of estrogen hormones."

With this I have suffered laryngitis and an inability to sleep due to insane coughing fits that usually start about a half an hour before bed! My doctor has said that it should run it's course in 2-3 weeks. Unfortunately, the Coactifed (cough syrup with codeine) and Nasonex (nasal inhaler to reduce allergies and cough) have done absolutely nothing for me. Tomorrow marks the end of week 2.

I really look forward to the rest of my training program. The "Alzheimer Day 100km Run Across the County" has now been officially announced. There are 12 spots for the full distance runners.... so if anyone is interested please let me know and I will get you in touch with the right people. Please note that the run is one that is done on pavement. It's a flat course with several stops. The stops are to drop off and pick up the relay people (generally takes 10-15 minutes to get going again). The stopping provides a challenge. Especially at the marathon mark..... you stop for lunch to feed the volunteers, police, and the runners. It is very hard to start back up after resting for 1/2 hour. That lactic acid really starts to build up!!!

So there you have it, you're pretty much caught up!
Have a great day!

That pic looks very painfull .. lol.
great blog have fun on your 20 miler.

I think I may be able to do that pose in about twelve years!!