It's been just over a year that one young woman's life was taken away
in an instant. It was 7 in the morning and she was running late for
work. Driving down highway 18 she was hit by a drunk man who had lost
control of his vehicle.... she ended up smashing into a hydro pole.

I run by the sight several times a week. Each time I think about all

she could have done or been. I think about her family and can't
imagine the grief they must feel. I think that it could have been
anyone, including myself. I appreciate how short life can be, and
live each day trying to get as much out of it as I possibly can. 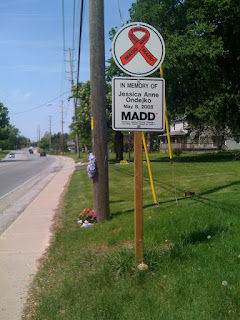 Recently MADD erected this sign (at the crash site) to remind people
about the effects of drunk driving.... and more importantly, to
commemorate Jessica's life.

I agree with the new tougher law that became effective May 1, 2009.
You are now considered to be over the legal limit if you have 50
millitres (or more) of alcohol per 100 millilitres of blood (it used
to be 80).

Sent by iPhone (so please excuse the wonky spacing)!