My training has officially started!

Yesterday marked the first official day of training. I had a 7 mile pace run, weights, abs and legwork. Got everything in except the leg work. 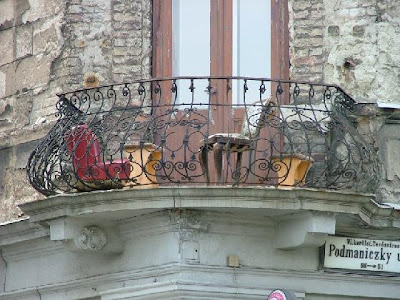 It was a beautiful day (just around the freezing mark). I was slowly getting out the kinks.... as one does the first few miles. Out of the corner of my eye, I notice movement from above. I turn to look and these 2 people were flagging me down from their balcony. I didn't realize that they were also yelling to get my attention (note to self: music too loud!).

They were in the process of removing their screens off the door and inadvertently locked themselves out. The woman told me that her nephew was on the main floor and asked for me to knock. I knocked and no answer. She asked me to try the door and it was locked. I rapped on the window and called out.

I eventually hear a small voice asking who I was. I try to explain.... the child opens the door a wee bit (looking sort of petrified) and I tell him that his aunt and someone else was stuck on the balcony and they needed him to unlock the door. I couldn't really tell if he understood... he said 'yes' and I asked him again "do you understand?". Once again, he nodded 'yes'.

I probably should have waited to make certain that he unlocked the door.... they weren't still trapped on my way back, so I think he figured it out.

My good deed for the day was done!!