Andrew has just finished reading Brian's book called 'Iron Heart'. He shared this story with me and I just had to blog about it. What an inspiration!! 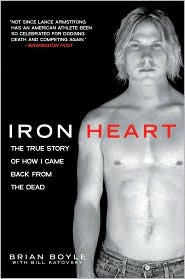 Brian Boyle suffered a near fatal car accident when he was eighteen. A former swimmer and bodybuilder, he had become a human skeleton but became determined to compete in the Hawaii Ironman. In October of 2007, he realized his goal and crossed the finish line in Kona. NBC television covered him during the triathlon. In 2008, Men's Health magazine named Boyle one of its twenty heroes.

Thanks for visiting my blog!