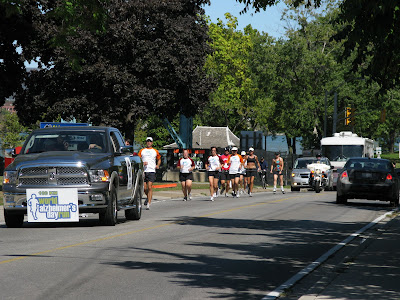 Friends and family have been asking me about the race...... I tell them that I went to places that I have never been to before, both emotionally and physically. The hardest part to sort out is that I really had a lot of negativity and self doubt. Not only was I negative about the race but negative about life in general. It's that negativity that really troubles me. Every race that I had struggled in before always had a light at the end of the tunnel. This time was different.

I am going to focus on getting rid of negativity in my life.

I didn't mention it before but 2 weeks earlier my ITB started giving me trouble (like it did during my 30 miler). So much so, that I couldn't run without pain. I did manage one 3 mile run a few days before the race and it wasn't pretty. I went into the 100k hoping to make it through. All the while knowing that the odds were against me.

I struggled early on.... it was mile 15 and I wasn't pumped and excited like I normally am. I am usually pretty peppy for the first 30 miles. Running seemed like a chore this time.

Mile 25... I could feel that my lower back was "out". When that happens, my IT band issue begins. I ran several miles pushing my left hip forward (with my hand) to avoid the crippling pain.

I was so fortunate that my physiotherapist was there (she ran/ bladed the 100km). During our lunch stop she worked on my back and got me aligned. I continued running, hoping that I would be alright. Fortunately, it never troubled me again.

At mile 35 I had a friend/ running partner join me for the duration of the run. My "pacer" I suppose. Rick, even though I bit your head off a couple of times I still really appreciated you being there. 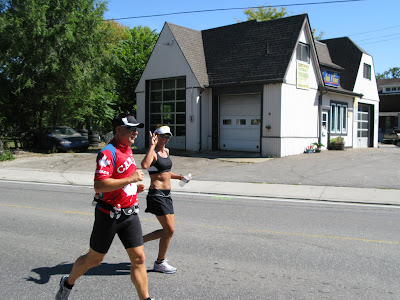 I don't know exactly when it happened but my left foot started getting sore. I thought that I had tied my laces too tight so I loosened them. The pain continued to get worse so I loosened the laces once again. By this point, I am in a lot of pain. I knew that I would have to get Mary (physiotherapist) to take a look at it.

Mary had a chance to look at it at the stop before the final leg. She did her thing and adjusted my foot. She mentioned something about a jammed ankle and foot bone and that she got it back in place. There was some relief.... by this point I had been running on it injured for about 10 miles. During the last leg (with about 200 m to go) my ankle gave out and I twisted the sucker. I am not sure how I finished... but I did!

Earlier in the run I had begun to get quite emotional. I had to fight back tears at some points. I had thought that I would have had a HUGE breakdown at the finish. Luckily, at the end, I was in too much pain to become a puddle.

Andrew came out several times during the day to meet up with me and show his support (what a sweetie). He had even surprised me by showing up at the start area. He was out of town on business and I wasn't expecting to see him until the afternoon. He drove home on 2 hours sleep so that he could see me off. Right now is when you say "AAAAAAAAAAAAW!"

I tried to Twitter as often as possible to let him know where I was and how things were going. At one point I Twittered asking him to bring me a Freeze when we ran past my house (may have called it a popsicle). I gotta say that nothing could have tasted better and been so refreshing. They were a little hard to run with (2 of those 14" ones). Well worth the trouble!!! 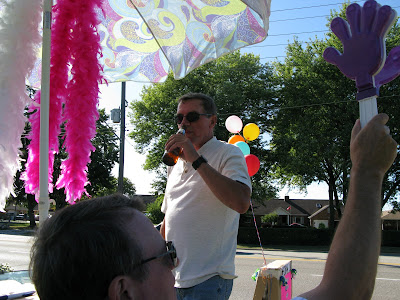 
I have to mention this: During the final stretch I felt like I wasn't connected to my body. I saw Janet, dad and Andrew cheering and waving but it was in slow motion, very surreal. 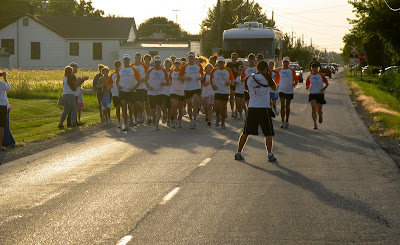 
I must say that I am very proud of my achievement.

Thanks again to dad and Janet for coming down to see my race. It meant a lot to me to have you here.

We wouldn't have missed it for the world - we had an emotional day as well - the excitment of waiting for you to go by, the cheering and honking of all the cars. Marilou was so very proud of you too. And when you finally ran past....I got a bit teary eyed myself. Love Ya.
Janet

What a gutsy hardcore runner you are, running through all that pain! Simply amazing. You inspire me. Congratulations!!

Congratulations on the finish! Your ability to manage your challenges and finish tell a lot about your character and the amazing people that supported you through this journey.

I wish you the best in your recovery.

Wish I could have been there!
Jo

Great job, these distance really peel back the layers, look like we both had ankle problems race day!