Today was a beautiful day!!!! The temperature was about 8 degrees when we started off. I was wearing every sort of protective brace and compression garment I had to help prevent any pain. They helped to a certain extent... but the pain is always there (even when not running). So I have made the decision (with heavy heart) that I need to take some real time off in order to heal myself properly. As much as I had hopped.... the "week off" at a time is not enough to allow me to heal :(

During the last leg of the run we noticed that a hydro pole was hanging from it's wires (the pole had broken right off near the top). As we got closer we realized that it was on fire!!!!!!!! There were 3 orange pylons in front of the pole. The truck that you can see in the second picture was a hydro truck.... they slowed down to give us crap for being so close to the live line. Get this, they continue on down the road.... WTF? I can't believe that they didn't have anyone watching or standing guard to protect pedestrians (or nosy runners). 3 pylons did little to instill fear or dissuade me from inspecting the unusual sight. Only in the county do they leave a burning (actual flames were coming out), live wired hydro pole unattended!!! Sheeeesh! Glad I had my iPhone!!!

Due to excruciating pain we cut the run a bit short.... completed 18.6 miles. I am so thankful that it was such a great day and! I wouldn't have wanted to struggle alone in -20 degree, snow drifting, snot-dripping weather!


I have tried out my new "Two Toms" anti-chafing powder (to prevent toe blisters). I will write a report on that later.... once I have showered and have had a good chance to survey the area!!! :) 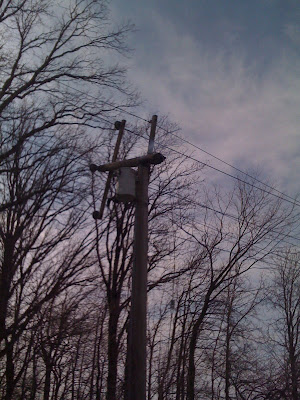 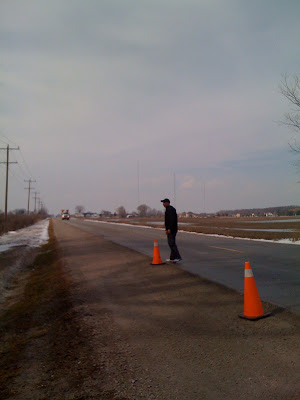 Never leave home without your camera/iphone - you never know when a good photo op will present itself. Take care of your injury.
Janet

I used the Blister Shield and changed socks(injinji) at mile 32, and still developed a few blisters, so I guess I'm still searching for the cure-all for blisters!!