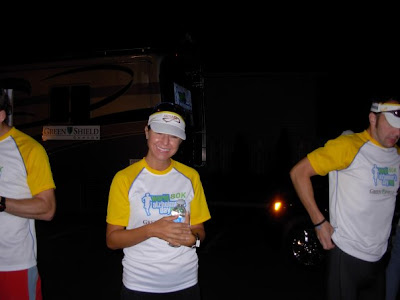 I am gonna try and keep this brief..... I was up at 4am and at my pick up location at 5am. Chris (race director ans organizer) picked 3 of us up and took us to the race start. We were a little late so the run began at 6:20am. It was very humid out! I should explain a bit about how the run works... In front of our "caravan" was a police escort, followed by a pick up truck with water and gels and energy drink, followed by the runners, followed by a Winnebago, followed by a mini van. We also had Police on motorcycles that played leap frog with the caravan.... asking motorists to pull over as went by. The whole run was done as a group to keep the pack safe. There were 6 people that were completing the entire 86km run (started out as 80 km but because of routing issues... blah, blah). I was the only woman running the full distance. The rest of the runners were relay people... we would stop every 8- 10km to drop off the old runners and pick up new runners. This frequent stopping proved very difficult on the legs... the stops were only supposed to be 10 minutes in length but ended up being more like 20+.... the first few stops were great but, it became increasingly difficult to get the legs moving after the stops (especially after the half way marker). I also found it difficult having all the "fresh runners" setting the pace... we would start up and they would take off.... I stayed at the back of the pack for most of the day... I kept my steady pace.... my other "full run partners" were usually at the front of the pack... they were all very competitive with each other... is it a guy thing???? I had thought that the run was supposed to be fun and that we would all run together. That being said, the guys are all accomplished Ironman competitors, runners, and cyclists etc. and they found the pace to be slow..... which is difficult if you're not used to it... but the pace was much faster than I was used to..... I believe that w 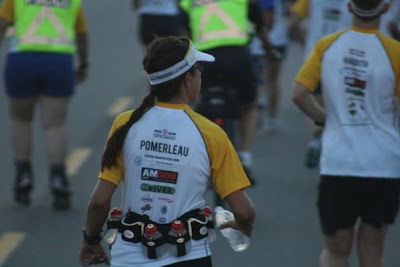 e completed the run in 9.5 hours... spend the other 3 hours in transition.... I know, I know... cry me a river. I don't mean to sound so negative but I was disappointed.... I didn't feel like part of the group.

I was very fortunate to be able to run with a lady named Maria... she stayed with me for the first 33 miles (her first Ultramarathon)... Thanks Maria!

I started the race out with a lovely migraine that lasted about 7 hours into the run. With each step I took I swear I could feel my brain hitting the top of my head.... the music that was blasting from the Winnebago didn't help matters!!

We had some comic relief at one point during the run.... we saw a man lying on the ground with his bicycle still between his legs. There was a police officer next to him... the whole group took an interest in this poor man's condition.... then we noticed that he had a can of beer in his hand... ha ha ha! The man was smashed!.... literally and figuratively!!! Toooo funny! So glad someone snapped this photo!!! Just looking at it makes me giggle again!! 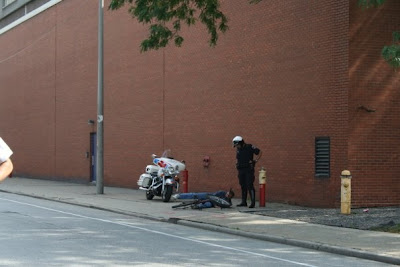 I will take this opportunity to note that my nutrition was really good. There was a brief period where I stopped sweating but I was able to rehydrate and keep electrolyte levels, sugar levels, and protein levels optimal. I was one of three full runners that did not need to take a break on the bus during the run... I ran it all and that makes me proud!!!!

It got pretty hot out around noonish and stayed hot for the rest of the run... with humidex the weather was 30 degrees C/ 86 F... with mostly sunny skies... too hot for my liking!

I was able to spot my husband driving by the caravan... he had just flown in from Florida and was driving his business partner back to the office. It took me a couple of moments to figure out where I knew him from... yes, it's sad and pathetic but you can loose your mind during long runs.... lost mine around mile 28... Honestly, I don't think that I have quite regained it back yet!!!! ha!

I will post some better pics later.. got these off facebook... quality too low to make the pics larger.


I suppose I shouldn't have complained about being at the back of the pack... my friend Mary (who roller-bladed most of the course) snapped a photo of me.... my skort was swinging in the wind and my bloody ass was hanging out... there are panties in the skort but they spent more time up my butt than anywhere else. I was just beside myself when I saw the photo... so she retouched it to save what little dignity I have left!! Thanks Mary!!! You're the greatest! 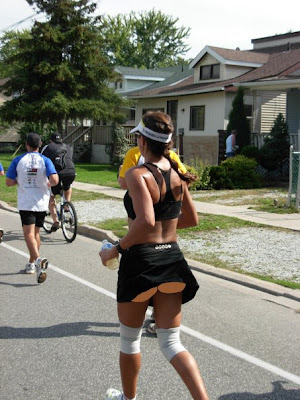 I guess I am not doing very well at keeping this short! It's hard to cram a full day's worth of activity, and emotion all into one little blurb!!

I had some friends that volunteered at 2 relay stations... was so great to see friendly faces!! One set was at mile 33 and the second set was at mile 53 (there was one last mini stop at the end so that we could all regroup and allow the full runners to lead the group to the finish line). Thanks to Shelley and Al for not only manning the relay station but for meeting me at the finish with a dozen pink roses... it meant so much to me. Thanks to Rick, Tammy and children for being at the last station and for waiting the extra hour because we weren't on schedule!

Thanks to Andrew for coming out on the motorcycle to find me 3 times during the run... especially since you had just got back in town and most certainly just wanted to veg! Thanks to my family (Dad, Janet, Mom) for having the "Front Yard Party"... it was the biggest cheering station on the route!!!!!

We finally made it to the finish line... where my legs immediately seized... there was a pasta dinner (couldn't eat much) and speeches from th 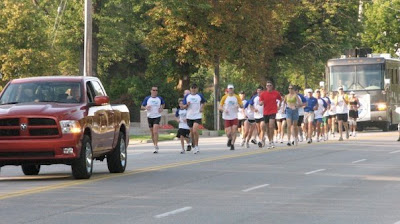 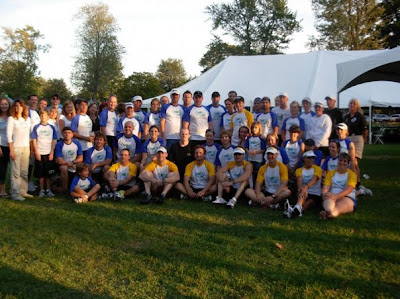 e CEO of the Alzheimer Society and Mayor of Amherstburg, and Chris (Race director and full run participant). This was followed by some massages!!! Yippee!!!!

The day ended at 10pm for me... it was a very tough run psychologically... I would like to think that I am a better person for it. This was the first race that I actually cried at the end.... I was emotionally and physically spent.

Here is the group of finishers.... the yellow sleeves in the front are the full participants (including Jackie, far right... OPP who roller bladed the course).

I will post more pics and thoughts as they become available to me!

Looking forward to next year's run!!!!